Segun Awosanya, A.K.A Segalink who is popularly known for convening the campaign against police brutality in Nigeria on social media as #EndSARS.

In a series of tweets on Monday morning Segalink reacted to Nigeria Financial issue… He explained why Nigerian Banks will never lend you money unless you prove to them that you don’t need it.

Our banks are financial institutions that will only lend you money provided you can prove that you don’t need it!

One of his follower replied him and gave his reason’s why banks are not giving loan to everyone and segalink quickly replied to him..

@brokinbottle said “The bank is a financial institution which should do that really but if you see the rate at which default paying back their loans. I know of a bank which gave out a loan to customers but salary earner and none but the rate at which people defaulted paying back ad at when due is not”

@segalink Replied: “The greatest defaulters are the people the banks run after distinguished. I have been around for a while. I know these things. Look at the debtors of most ruined banks are they salary earners or startups?” 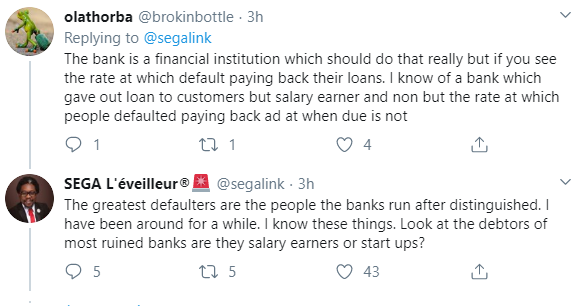 This article first appeared on bodexng.com

Dogecoin How and why to buy

Self-made millionaire: This is the No. 1 way to get rich

Become a millionaire in 2020